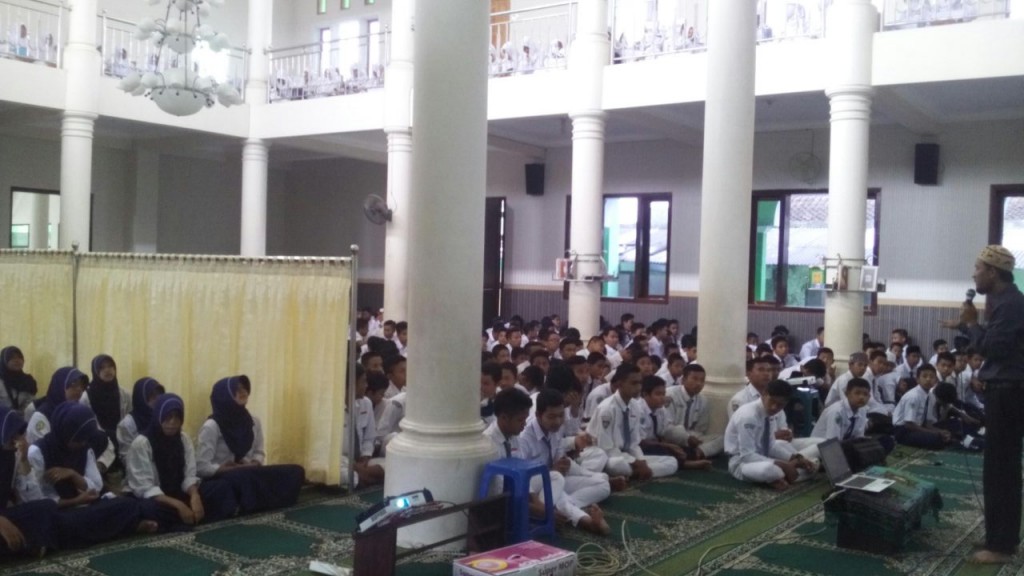 “Say No to Drugs”. This slogan has been becoming an aspiration with relatively no any realization. The fact is in line with the research of Indonesian University’s student that drugs consumers, this year, have increased from four million consumers to five million consumers. Meanwhile, twenty five percent of them are students. The finding, at least, had encouraged State Islamic University Students of Malang having KKM Posdaya Masjid in Pakis (i.e. group 159) to conduct seminar about “Prevention of Drugs Abuse for Teenagers (1/8).

The seminar conducted at Mustofa Mosque of Pakis in Malang was undertaken in order to lessen juvenile delinquencies done by teenagers around the district such as getting desert of school and consuming cigarette. Siti Zubaidah, an English language and letter student, as the committee conveyed “I hope this seminar can give comprehension for teenagers here about drug dangers so they might avoid it from now on”. That morning, the mosque both first floor and second floor was filled by around nine hundred students of SD, MI, SMP, SMA, SMK NU Pakis. Moreover, their teachers also attended the seminar. Several minutes later, the students as well as their teacher conducted an istighotsah leaded by ta’mir of the mosque. Afterwards, the speaker, Mr. Anang from National Narcotics Agency started the seminar with an inspiring video. The video, successfully, made the students keep paying attention to what Mr. Anang revealed. Furthermore, he went on his lectures involving dangers of drugs, kinds of drugs, characteristics of drugs and many more. At the end of his lecture Mr. Anang gave tips for school in case of preventing the misuse of the drugs including enhancing quality of the school, discipline, and extracurricular.

The drugs abuse, for teenagers, is preventable when not only teachers but also parents apply certain strategies of avoiding the misuse of the drugs. (Muyassaroh)